Ode to the Tenderloin

Those who know me know that for over six years I lived in San Francisco’s Tenderloin. The Tenderloin is not, as it were, your mother’s San Francisco--unless you happen to be old, desperate, drug-addicted, or an immigrant or refugee. This neighborhood, full of crime and vibrance, holds a special place in my heart.

I got there in 1992 by accident. My ex-husband and I were looking for affordable and centrally located apartments in which to start our married life. We needed easy access to public transportation because we were traveling opposite directions: he would be taking CalTrain to Stanford, and I would hop BART to UC Berkeley.

Not knowing much about anything, we only gave ourselves one day in the city to find an apartment. Do you remember the Want Ads? We wanted an apartment, so we bought a newspaper, the kind that blackened your fingertips, and we circled listings with a pen. Then, we drove around and found the listings, hopping in and out of our rental car in a real estate equivalent of speed dating.

After kissing a few frogs, we found our dream home on Post and Leavenworth. The Tenderloin, almost entirely rebuilt after the 1906 earthquake and fires destroyed it, is, as you may know, home to single room occupancy units, known more popularly as SROs, and small one-bedrooms. Many of these structures, while often tending toward decrepit, are innocent of character-stripping updates like granite countertops and stainless steel appliances, or at least they were when I lived there 20 years ago.

When I was 23, these buildings were a window into the comically glamorous world of Nick and Nora Charles, and their little dog, Asta, as well as the more romantically sinister world of The Maltese Falcon, which was written and set in an building just blocks from my new home. Nick and Noraisms such as, “Hey, Fred, shed the chapeau,” fired our collective imagination. My ex-husband and I were inspired to call ourselves Max and Vera, and we became crime fighters. Late nights running around hand-in-hand along the streets of San Francisco with the man I loved, I often felt like I was flying. Those were good times.

The Tenderloin itself, only God knows how, has for the most part resisted gentrification. Things have changed, yes. One upgrade is that more people seem to be smoking pot than taking crack. And the city has painted really pretty crosswalks in the deepest part of the Loin, I don’t know why. They also named part of the Tenderloin “Little Saigon,” in honor of the many refugees who were relocated to the Tenderloin in the 70s. And, because it’s still a little more affordable, the Tenderloin is home to a developing art scene. Let’s hope it doesn’t get too hip. Our homeless still need homes--even if home is cold and dirty sidewalk.

For really great Vietnamese food, don’t hesitate to off-road and find one of the tinier restaurants on one of the seedier, less-traveled streets. Talk to the proprietor, who will probably be a well-educated and ambitious son or daughter of parents who don’t speak English very well, but know how to cook up a storm. Feel impressed by what human beings achieve despite difficult circumstances and in unlikely environments. Feel sad when you walk by the men who lies, wrapped in dirty blankets and cardboard, crumpled on the sidewalk. Walk faster and hold your purse tighter when you travel through a group of men and women clumped in wheelchairs, shouting boisterously, leaning against walls, or smoking joints.

Back in ‘92, our new apartment was on the third floor, no elevator, of a pale pink Edwardian. With hardwood floors, two bright bay windows, and plenty of fantastic vintage details like a working pocket door, a Murphy bed, beautifully detailed woodwork, and a real live trash shoot, I was in heaven.

Of course we had second thoughts when our San Francisco-based friends told us, after we had signed our year lease, that we absolutely couldn’t live there, that the Tenderloin was too dangerous and why hadn’t we asked? It was too late.

Things really hadn’t seemed bad when we were looking: it was a glorious San Francisco day and the freaks were nestled in their nooks and crannies, waiting for the nightlife, baby. Upon moving to San Francisco, we did experience culture shock: January 1993 saw a record straight 31 days of rain. Riding the bus with wet and unwashed homeless people was new to us, getting off the bus into a thicket of prostitutes was even newer, and walking through throngs of street thugs made me break into a cold sweat.

The apartment was noisy as H***, and we got our share of cold people ringing our doorbell late into the night, hoping to be let into the lobby for a more comfortable snooze. We were on a first-name basis with Jasper, the crack-addicted Romeo who used our entryway for his rendezvous because, he told us, it was deeper and less well-lit than the others. One guy rang our doorbell so frequently we dumped water from the potatoes we had boiled for dinner on his head.

And everything was so expensive! The first time I walked down the four flights of stairs to do laundry in our basement and saw the number of quarters I would need to do it, I turned right around, leaving in a state of shock.

We made friends with an ever-changing array of neighbors, and learned all sorts of things about what you could do, with and without permission from the landlord, to upgrade a city apartment. We painted, we took off cabinet doors, we switched out light fixtures, and during the stray heat wave, we partied on the forbidden roof. We turned off the lights in our apartment and spied on the neighbors like we were characters from Rear Window.

We even participated in a community clean-up, meeting with the mayor’s son in a large basement room where gloves, brooms, and thank-you hotdogs were passed out. We braved the streets and swept up pigeon s***, used condoms, and syringes. Getting that close to the streets evoked images of times and places in which I hope to never be.

When my husband’s dad was visiting us, sleeping on the couch in our tiny apartment, we passed through a group of cross-dressing prostitutes on our way to get a video. Michael’s dad commented about one, “She’s certainly got legs that go all the way to the floor.” Yeah, dad, and maybe a couple of other things you’re not quite ready for. . .

On another trip to that same video store, in the time it took us to select our video, a man had flung himself from the top of the building. The sight of his blood trickling towards the gutter from beneath a mound of yellow tarping is an image that has stayed with me. Combing the newspaper, I found reference to a man who had stabbed his girlfriend and her lover and then leapt from a building on the corner of Sutter and Leavenworth.

The Tenderloin gave me an education, and it was a varied one. It was all about partying, new experiences, and an elbow-rubbing window into a San Francisco most people don’t want to see. But I want to see it, because I want to know the truth and keep an open heart despite all and everything.

Walking through the Tenderloin, is for me, still an inspiring experience. I love the jumble of pre-Deco buildings, the graffiti, the many shades of brown-skinned bodies. In the Tenderloin, men still call me gorgeous, but they don’t follow me or give me a hard time. The faces there, many of which are black faces, exude a kind of hard-lived character you don't often find in neighborhoods like Pacific Heights. The neighborhood is upfront, if not honest.

I wish everyone could visit the Tenderloin and see it through my eyes. You can be the 23 year-old who is eating her first burrito, trying awkwardly to order in Spanish. You can sit in front of your computer at night, drinking a very strong gin and tonic, and do your own Hemingway impression. You can say hello to the many people who walk by, and notice that, though that gentleman is poor, he is undeniably well-dressed. It's neither the safest nor the cleanest neighborhood. I feel, though, that it is one of my places. I lived my youth there. 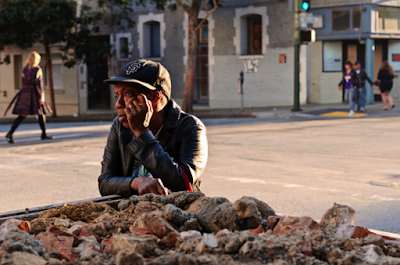 I'm leaving this blog open for all comments, but I prefer comments that aren't anonymous. Don't be shy! Tell us who you are. . .